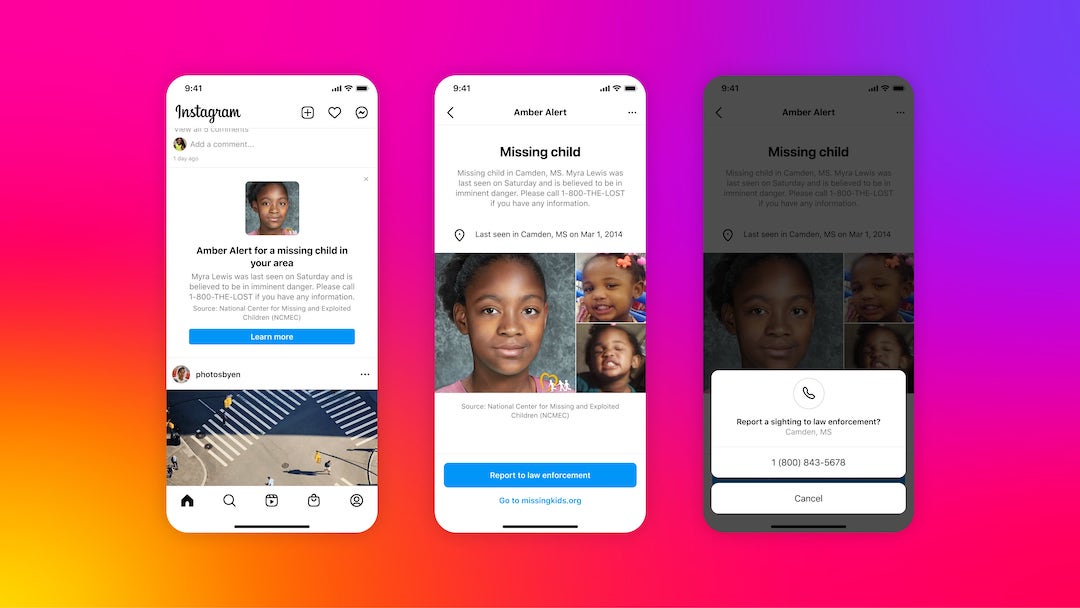 As a prime platform for photo updates, Instagram is leveraging its power to send out Amber Alerts so the public can keep a lookout for missing children abducted near them.

Alerts will be injected into main feeds—in between photos, videos, and Reels—informing users that there’s an active search for a child in the area. For efficiency, updates will be targeted by geographic area.

Amber Alert posts will include a photo of the missing child, a description, and where they were last spotted. Importantly, users can respond to them and share the alerts with fellow users.

The feature harnesses Instagram’s influence and outreach to raise awareness about missing children. The hope is that the added visibility will raise the likelihood of children returning home safe and sound.

“Instagram is a platform based on the power of photos, making it a perfect fit for the AMBER Alert program,” says Michelle DeLaune, President and CEO at the National Center for Missing & Exploited Children, in a press release. “We know that photos are a critical tool in the search for missing children and by expanding the reach to the Instagram audience, we’ll be able to share photos of missing children with so many more people.”

In 1996, nine-year-old Amber Hagerman was riding her bicycle in Arlington, Texas, when she was kidnapped and later brutally murdered. The alert system, created in her name, is also short for America’s Missing: Broadcast Emergency Response. It works with law enforcement to sound the alarm on abducted children in hopes of safely recovering them.

To bring Amber alerts to its platform, Instagram worked with child safety organizations including the National Center for Missing & Exploited Children (NCMEC) in the US, the International Center for Missing & Exploited Children, the National Crime Agency in the UK, the Attorney General’s Office in Mexico, and the Australian Federal Police.

The social network is looking to expand Amber alerts to other countries.

[via Mashable and Social Media Today, cover image via Instagram]